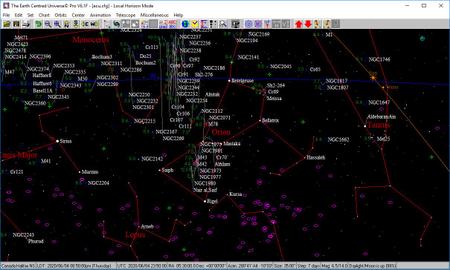 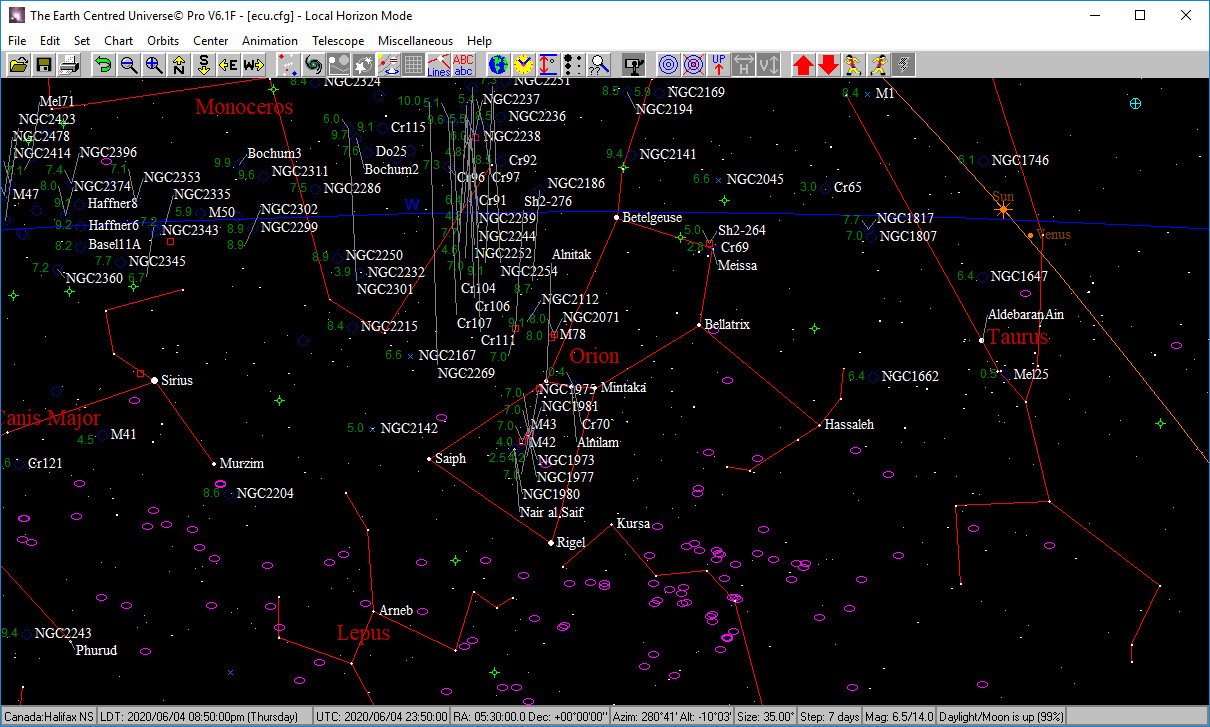 The Earth Centered Universe Pro 6.1G | 254.1 Mb
The Earth Centered Universe (ECU) Pro V6.1 is a planetarium and telescope control program capable of simulating most of the phenomenon of the Earth's sky. Designed for the demanding requirements of an observing amateur astronomer, it also provides extraordinary accuracy as a planetarium program for the "armchair" astronomer or any other person interested in learning about astronomy.

Highlights:
Known for its ease of use, rich feature set, high-accuracy, and lightning fast speed.
Includes extensive databases such as the Hubble Guide Star Catalog; the detailed, amateur oriented, SAC deep sky database; the huge Principle Galaxy Catalog; the General Catalog of Variable Stars; the Washington Visual Double Star catalog; a dedicated planetary nebulae database; the Sun and Moon; the planets; 700,000+ asteroids (downloaded from Lowell Observatory); and add your own comets, asteroids and tens of thousands of your own objects too.
Comprehensive control of most computerized telescopes on the market (even many discontinued ones too). Interfaces to many telescopes and mounts natively, but also supports the ASCOM Inititive's telescope and focuser "drivers".
High quality printed star charts.
Written by an observer for observers.
Written by a CCD imager for imagers.
Powerful animation mode.
A large detailed up-to-date User's Manual with context sensitive help.

Included and Supported Databases:
The Yale Bright Star Catalog (9,100 stars to magnitude 6.5) - included are many "common" names for the bright stars
The SAO Star Catalog (about 250,000 stars to magnitude 9.5)
The Tycho-2 Star Catalog (about 2,500,000 stars to magnitude 12-13)
The Hubble Guide Star Catalog (about 15,000,000 stars to an average magnitude of about 14)
Support is provided to read the US Naval Observatories A-2.0 (~500,000,000 stars!) and SA-2.0 (~50,000,000 stars)
The Saguaro Astronomy Club deep sky database (V8.1) which contains 10,342 objects of all types, including of course the Messier Catalog
The Principle Galaxy Catalog (2002 edition - about 1 million galaxies)
The General Catalog of Variable Stars (September 2015 version - 52,011 stars)
The Washington Visual Double Star Catalog (2016Mar25 version - 135,098 pairs of stars)
The Wallace-SEC galactic planetary nebulae database (V7 - 1143 objects)
The Lowell Minor Planet Database (over 700,000 minor planets). This database is updated from within ECU over the Internet.
Enter the orbital elements for up to 10,000 comets and minor planets (asteroids) (comets and asteroids can be automatically downloaded from within ECU from the International Astronomical Union's Minor Planet Center)
The eight planets (and Pluto!), the Sun, Anti-Sun, and the Moon
Add up to 50,000 of your own objects

Main Features:
ECU is lightning fast compared to many other astronomy programs and runs very well on older computers that you might use in the field (e.g. older laptops).
ECU is very easy to use. Most operations are performed with the mouse. A "toolbar" is provided for most common functions and for those who prefer to use the keyboard, there are many hot-keys.
The sky can be drawn as either in Sky Atlas (north is up) mode, Local Horizon (up in the local sky is up) mode or with the sky rotated at any arbitrary angle.
It exhibits a colorful display - the colors of all screen elements are controllable by user. Fonts can also be set.
High quality star charts can be printed (in black and white and in full color) which are highly customizable by the user including titles, legend, fonts, and border dimensions. You can also print two charts per page at different zoom levels.
ECU status displays include the local time, universal time, latitude and longitude, RA/DEC, AZ/ALT, field size, magnitude limits, sky darkness, hour angle, sidereal time, and Julian date.
Stars can be drawn in color based on either their spectral type or B-V color index.
Deep sky objects are drawn their correct size, shape, and orientation (when this information is included in the database).
There is advanced control over magnitude limits for all types of objects.
Clicking on an object causes an information box to pop up. All objects provide their RA, DEC, azimuth, altitude, rise and set times, magnitude (if known), air mass, extinction, galactic latitude, and galactic longitude. Other information provided is as follows:
The Sun: distance in AU, kilometers, and light travel time; angular size; solar longitude
The Moon: distance in kilometers; angular size; phase angle; phase age in days; its illuminated fraction in percent
The planets: distance in AU, kilometers, and light travel time; angular size; phase; rates of motion; ecliptic latitude and longitude
Comets and asteroids: distance to the Sun and the Earth in AU, kilometers, and light travel time; solar elongation; phase (for asteroids); rates of motion; ecliptic latitude and longitude
Yale stars: Yale number; HD number; SAO number; Flamsteed/Bayer designation, color (B-V); spectral type; proper motion
SAO stars: SAO number; spectral type
Tycho-2 stars (when information is available): Tycho-2 number, Hipparcos number, HD number, magnitude (B and V), proper motion, and parallax (with error estimate)
Hubble Guide Stars: GSC catalog number; estimated position error; magnitude band; Plate ID
SAC deep sky objects: a varying amount of information, but usually their name (and alternate name); Dreyer description, angular size; position angle; object class; notes
PGC galaxies: the primary and up to four other names; morphological type; angular size; position angle; object class; radial velocity; implied distance in light years
Variable stars: minimum and maximum magnitude; designation; type of variability; period; rising time (or duration of eclipse); time of previous maximum
Double stars: combined magnitude of the pair; discoverer code; DM number; magnitudes of both stars; separation and position angle at up to two dates; spectral type
User objects: user number; text description
The user can display up to 50 images of an object.
The user can add observing notes about any object.
The user can measure angular distances and position angles on the sky with the mouse. Several angular formats are provided.
All user settings can be saved to named configuration files for later retrieval. Comet and asteroid elements can be saved to or loaded from separate ASCII files.
The time can be set as local mean time, UTC, Julian Date, or from the computer's clock (local or UTC). Dates can be entered from 4713BC to 9999AD. For Canada, US and Europe Daylight Saving time can be automatically set.
The observer's location is entered by latitude and longitude or from a list of cities (add your own, too).
Sync your time and/or location using a GPS receiver.
The effects of observer's parallax, nutation, precession, light travel time, aberration, and atmospheric refraction can be individually controlled.
The sky can be displayed as white on black or black on white, or, of course, in full color. Special "night vision" modes protect your night vision when ECU is used in an observatory.
ECU displays the horizon line, custom horizon lines set to match your observing sites, ecliptic line, meridian line, RA/DEC grid (auto scaling), Local Horizon grid (auto scaling), constellation lines, boundary lines, galactic equator line, etc.
Extensive text labels are provided for all types of objects. Text labels can be intelligently placed to avoid overlap.
Several field "targets" of programmable angular size, including rotatable rectangles, can be drawn to represent the field of view of your main telescope and finder scope respectively. You can place up to 100 of these "targets" anywhere on the sky.
The user can center the display at any RA/DEC, AZ/ALT, Hour Angle/DEC, bright star, constellations, Messier object, named deep sky object, point on the horizon (north, south, etc.), or solar system object.
The object databases can also be extensively searched.
Powerful tools to search and filter comet and asteroid elements by brightness, sky position, visibility, Earth distance, etc.
Create detailed reports (that you can import into a spreadsheet or database program such as Excel) of objects plotted on the screen or on printed charts.
ECU's animation mode allows time increments from 1 second to four years. The display can be "locked" to the Sun, Moon, a planet, a comet or asteroid, an AZ/ALT or an RA/DEC. Trails of objects with time labels can be drawn.
A dialog box to display the rise/set times of the Sun and Moon on the current day is provided. It also shows the times of civil, nautical, astronomical twilight, the phase of the Moon, the length of the day and night, and the length of nautical and astronomical darkness.