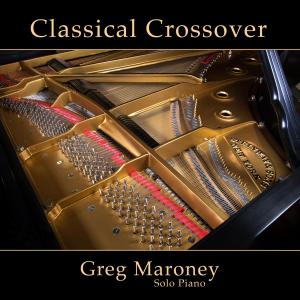 Contemporary instrumentalist Greg Maroney's solo piano compositions evoke wistful stories and images of the rural American countryside, in particular south central Pennsylvania, where he resides with his wife and many animals. His simple yet masterfully performed music spans emotions ranging from tranquil and relaxed to nostalgic, but is always representative of a life lived at peace with nature. The award-winning musician has released dozens of recordings since the 1990s, the majority of which are self-penned, including 2002's Sentinel and 2005's Wind Chimes. He has also released religious recordings, such as 2011's A Christmas Collection and 2016's Hymns: Healing Piano Solos.


Maroney began studying both classical and jazz piano at age five and later, in the early '70s, studied classical Indian music as well. The pianist performs throughout the Pennsylvania area – at local restaraunts, radio stations, weddings, private parties, even the governor's mansion – in addition to venues across the United States. His first album, Songs of the Water Rose, appeared in 1997. Since then, he has regularly released material, including Copper Hat (2001), Harmony Grove (2003), and The Garden Gate (2009). Holiday-themed A Christmas Collection appeared in 2011, as did The Spectrum of Love. Following additional solo piano works such as 2014's Coming Home, Maroney released The Light Within, an album of ambient mixes, in 2016. The year also saw the release of Hymns: Healing Piano Solos and the first volume of Quiet Piano Improvisations. Its sequel appeared in 2017, followed by Star Light, Star Bright. In 2018, Maroney released a series of albums of solo piano improvisations dedicated to each of the four seasons. Remembrances, a collaboration with Sherry Finzer, appeared near the end of the year. ~ Jason Birchmeier & Paul Simpson