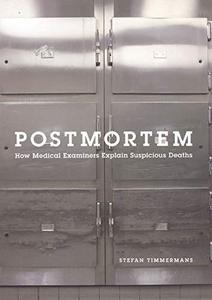 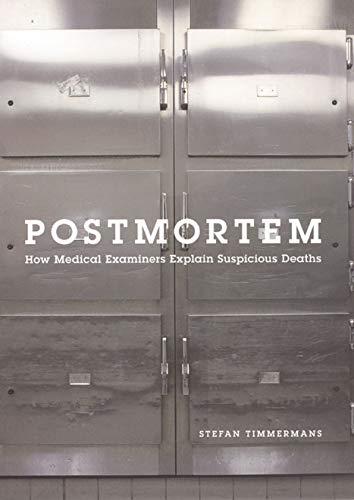 As elected coroners came to be replaced by medical examiners with scientific training, the American public became fascinated with their work. From the grisly investigations showcased on highly rated television shows like C.S.I. to the bestselling mysteries that revolve around forensic science, medical examiners have never been so visible—or compelling. They, and they alone, solve the riddle of suspicious death and the existential questions that come with it. Why did someone die? Could it have been prevented? Should someone be held accountable? What are the implications of ruling a death a suicide, a homicide, or an accident? Can medical examiners unmask the perfect crime? Postmortem goes deep inside the world of medical examiners to uncover the intricate web of pathological, social, legal, and moral issues in which they operate. Stefan Timmermans spent years in a medical examiner’s office, following cases, interviewing examiners, and watching autopsies. While he relates fascinating cases here, he is also more broadly interested in the cultural authority and responsibilities that come with being a medical examiner. Although these professionals attempt to remain objective, medical examiners are nonetheless responsible for evaluating subtle human intentions. Consequently, they may end—or start—criminal investigations, issue public health alerts, and even cause financial gain or harm to survivors. How medical examiners speak to the living on behalf of the dead, is Timmermans’s subject, revealed here in the day-to-day lives of the examiners themselves.